I hear that! Currently wrapping up the kids electric gokart, modding a fat tire motorcycle and just picked up two more 3wheelers to rebuild. Beats watching TV though.

If they ever open the dunes back up check out these fat tire bikes. Perfect for the wife/kids to mess around on in the sand and doesn't take up much space. https://pitsterpro.com/index.php?route=product/product&product_id=1253270
M

augustaf said:
Very nice job, a beautiful ski! I really like the filled in scuttle (scupper) valve!
Click to expand...

Quinc said:
I hear that! Currently wrapping up the kids electric gokart, modding a fat tire motorcycle and just picked up two more 3wheelers to rebuild. Beats watching TV though.

If they ever open the dunes back up check out these fat tire bikes. Perfect for the wife/kids to mess around on in the sand and doesn't take up much space. https://pitsterpro.com/index.php?route=product/product&product_id=1253270
Click to expand...

Pretty cool but already have dirtbikes and RZR.
My other big time drain is "nerd stuff" Star Wars costumes and props when I'm not wrenching on things with engines.

mikidymac said:
The heat gun and dowels worked great as recommended here on the X. I made sure to get the inside first then the rear top corner and work out from there.
Click to expand...

Can you expand on what you mean by "...get the inside first ..." ? Do you mean you attached the entire inside along the vertical gunwale and then dealt with the "rolled over" and "corner" parts? Also, if you have a link to the talk about the heat gun on foam, I'd appreciate not having to search mine for it.
M

Someone here had a how-to. Found it No-Seam-Turf
But basically you do the vertical sides first and leave the part that wraps over long and sticking up. Then you use a heat gun to heat the part sticking up and as it heats it will start to fall over and you smooth it down by hand following the curve over. Once you start heating and smoothing it will make sense.
M

Getting so close I can taste it.... 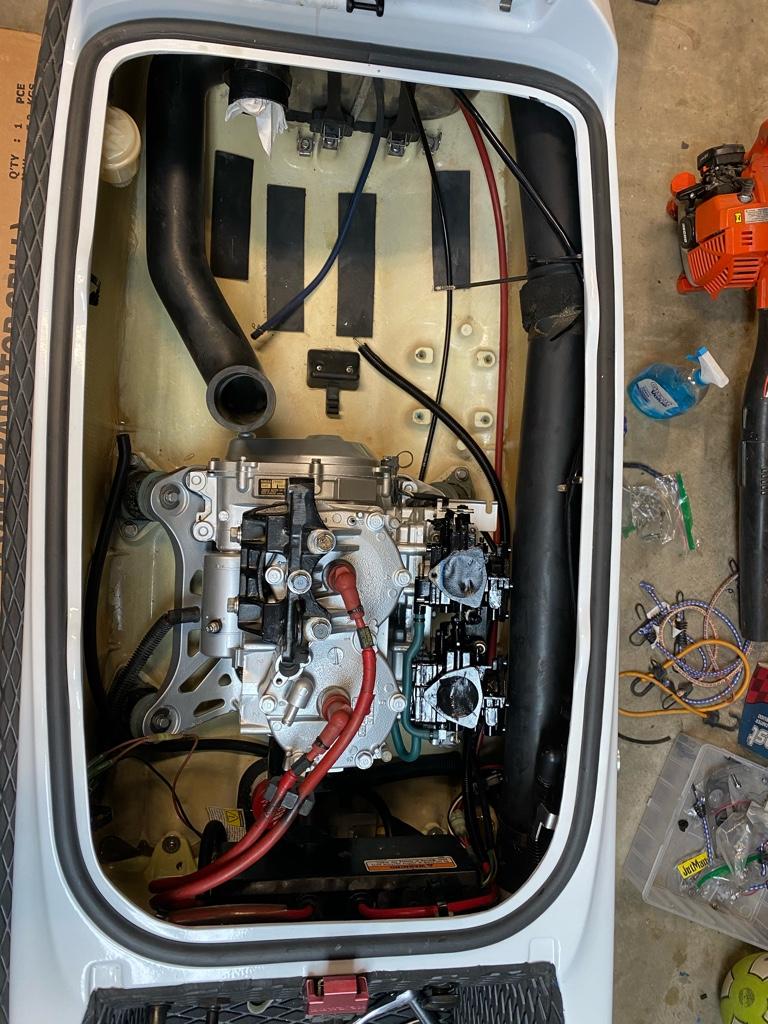 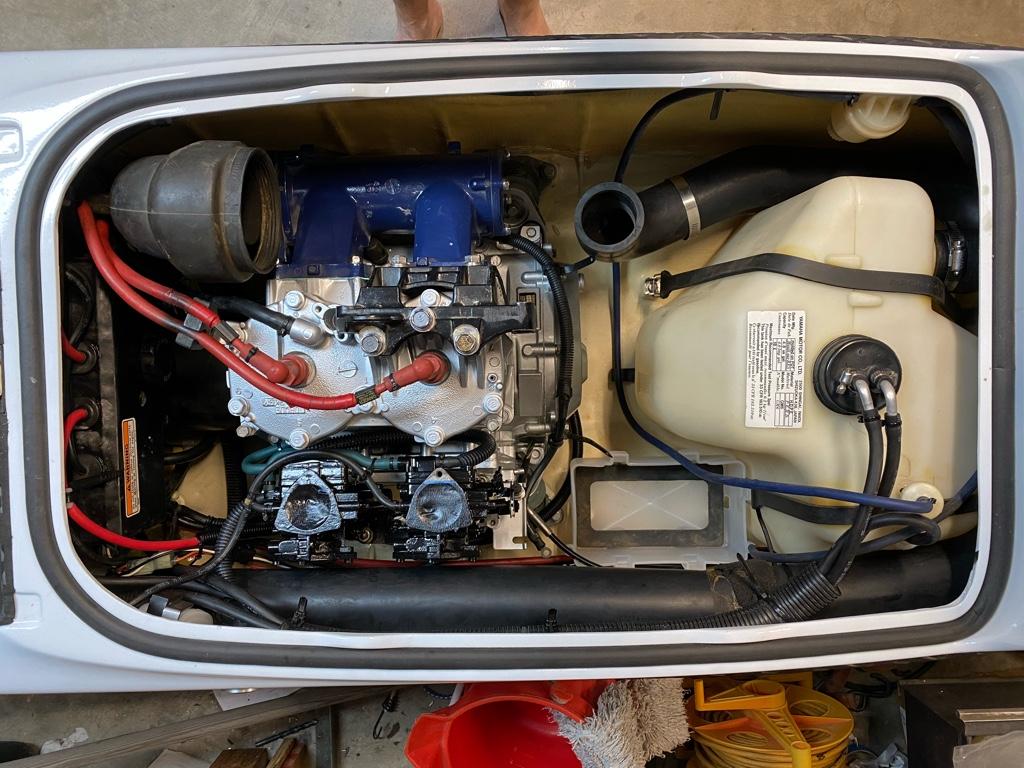 Only things left are install the bread box, sync the carbs, install the air box and attach the throttle cable. A little premix and time for brraaappp brraapp.

Stock SJ exhaust is so quiet, I love it!
M

brraaapperdoodle said:
Stock SJ exhaust is so quiet, I love it!
Click to expand...

Really just for break in and to make sure everything is good to go then throwing the factory B pipe and ADA head on.
M

So after the so so long journey she is alive and running.

Not running good though. Slow to take throttle and backfires out the exhaust if you stab the throttle. Arrrgggghhh! 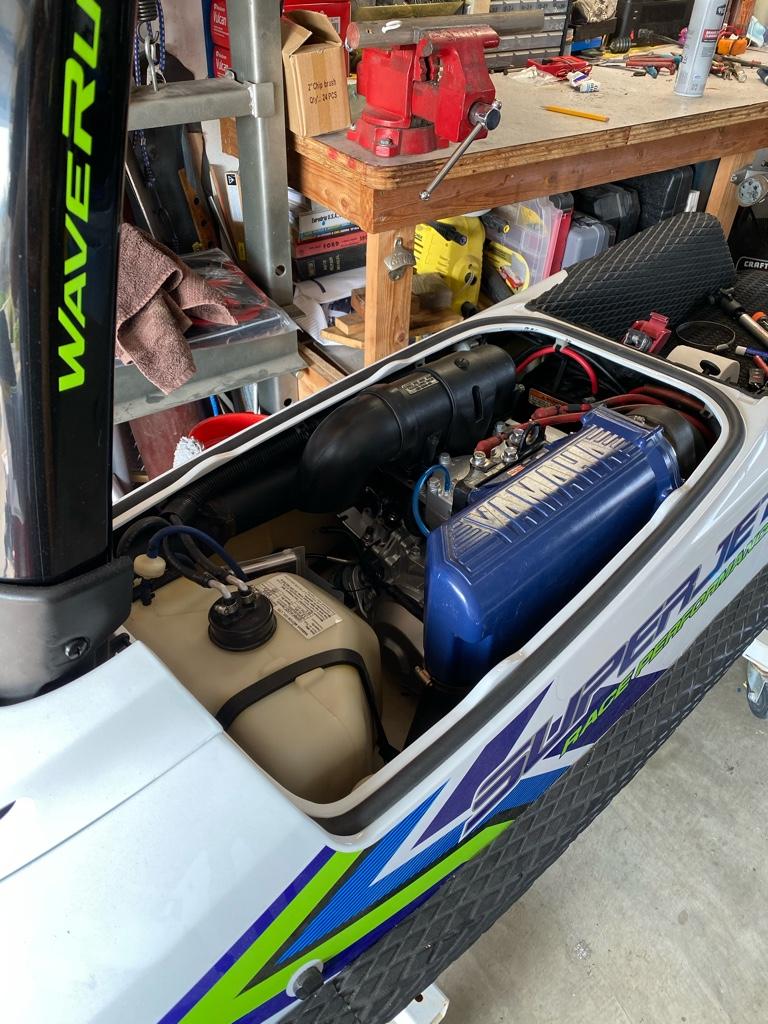 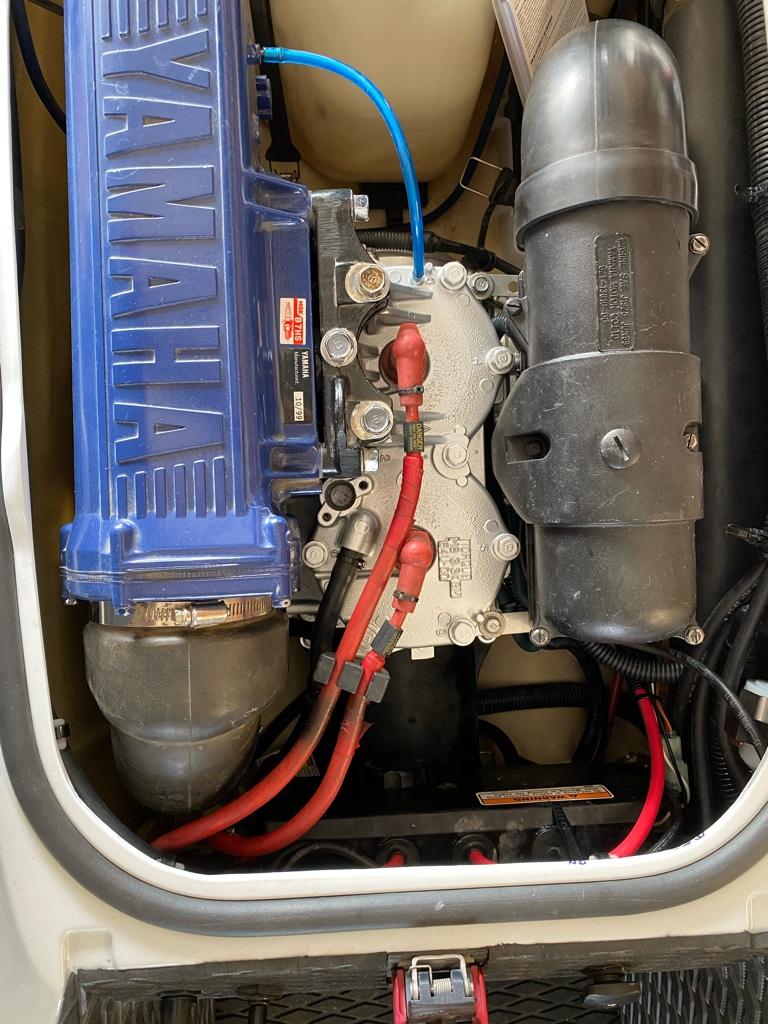 Already reached out on the drivetrain section and @TheBuzzard and big kahuna were kind enough to help. They suggested flywheel spun but I’m sure it’s on and secure. And possibly a bad CDI. The CDI looks like it saw water at some point and had a bad connector I fixed but I don’t want to start throwing parts at it. Plugs were pretty wet for only running a few seconds.

Might try my 6M6 CDI just to see if it fixes the issue before ordering the correct one from JetManiac. It’s going to be a couple weeks before I can mess with it again unfortunately.
M

So I can say at this point it’s done and running but will have to wait till spring to hit the water although this is California so you never know.

Although @s3b0 beat me to the finish I’m calling this build done for now. 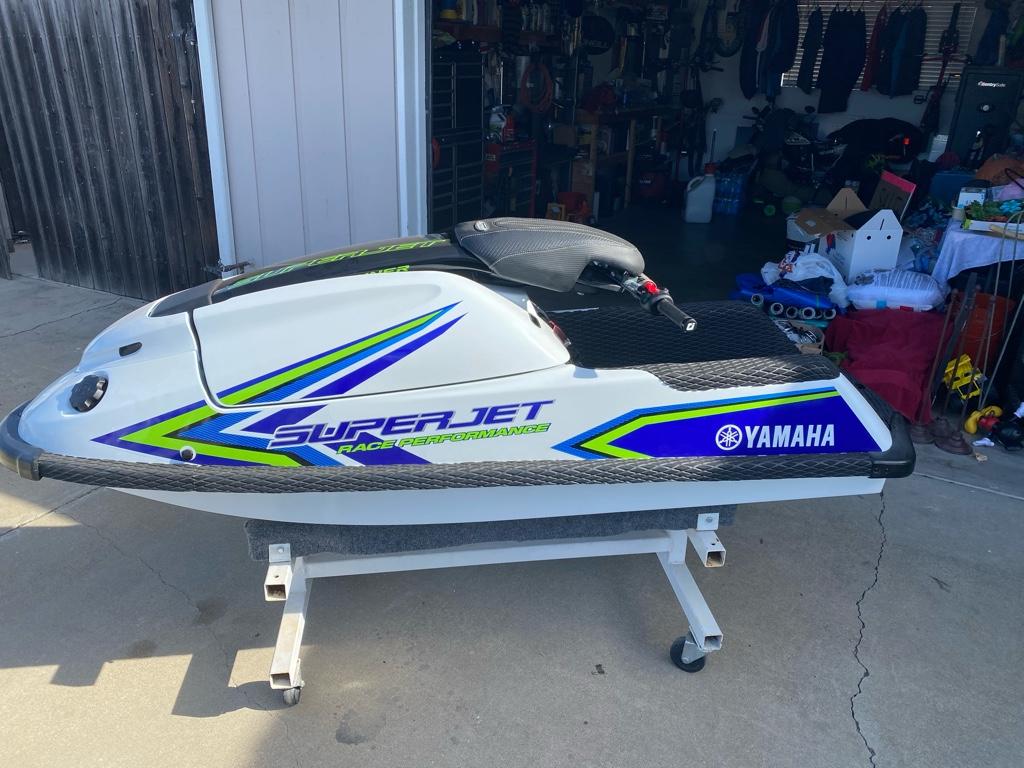 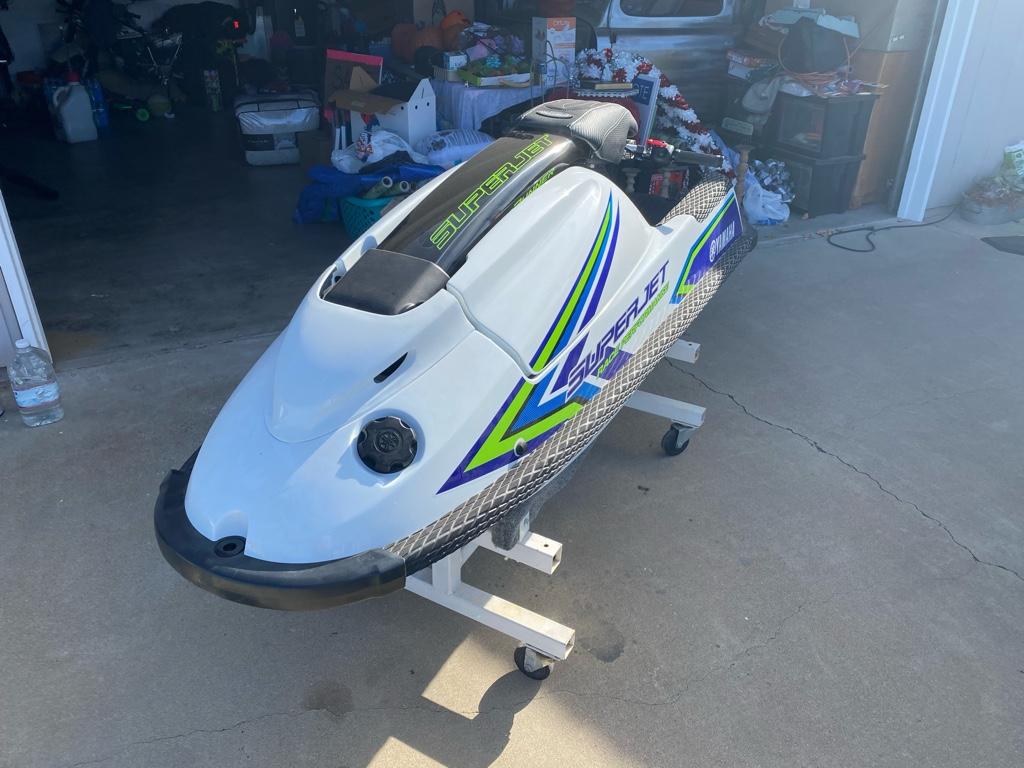 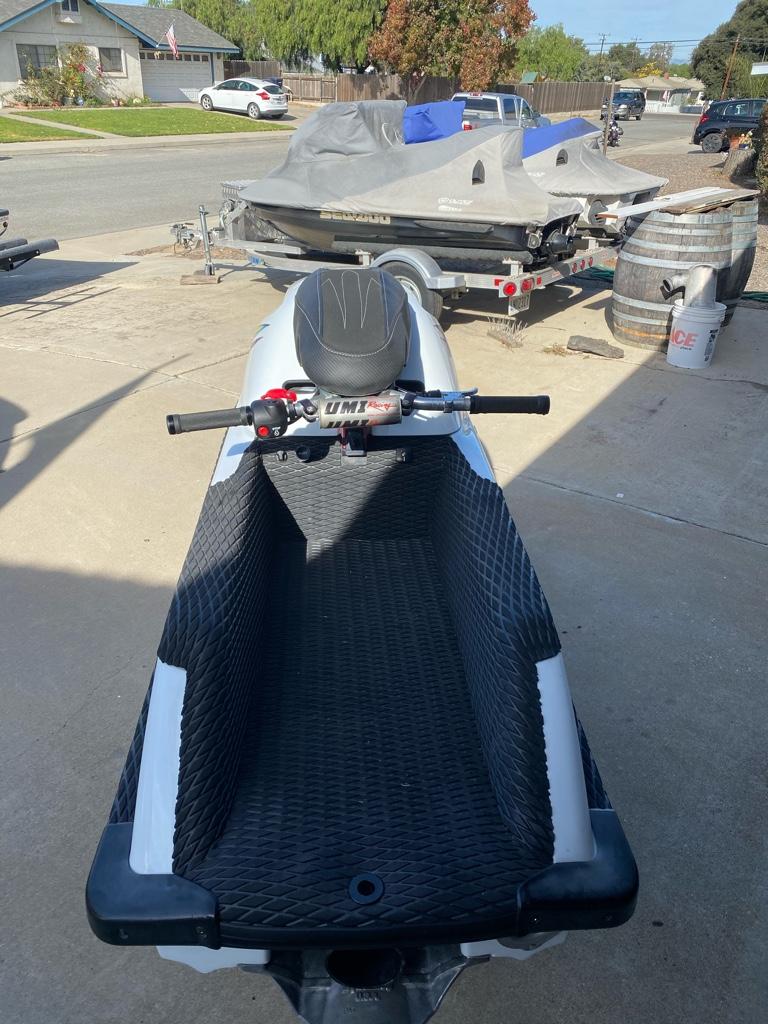 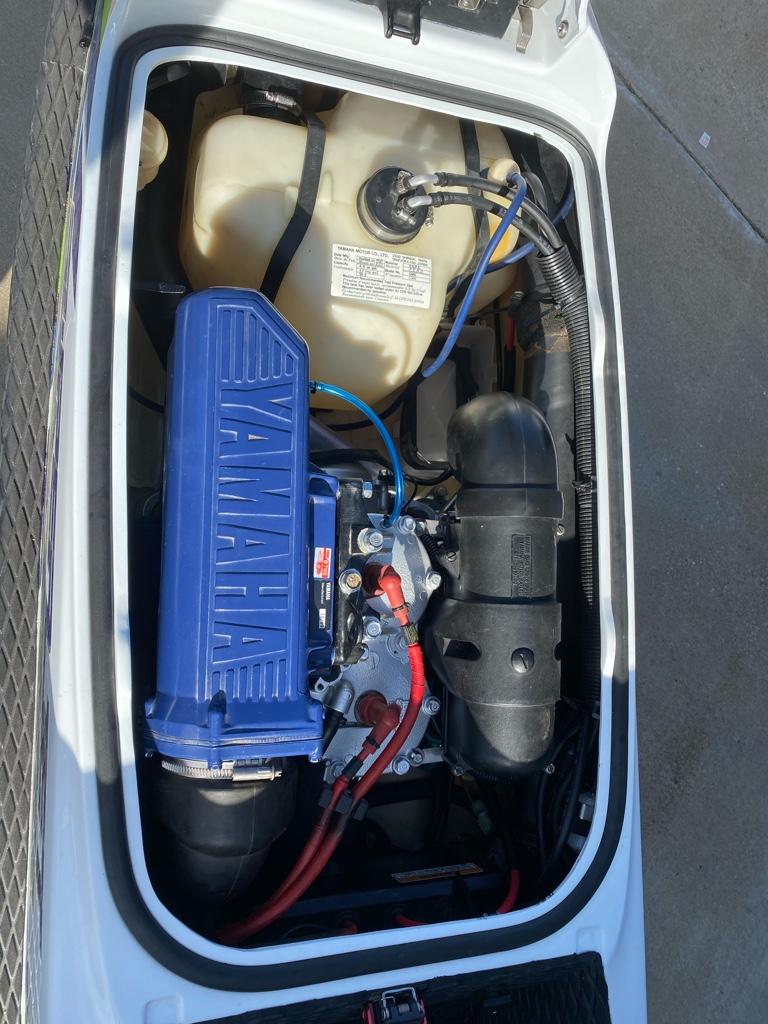 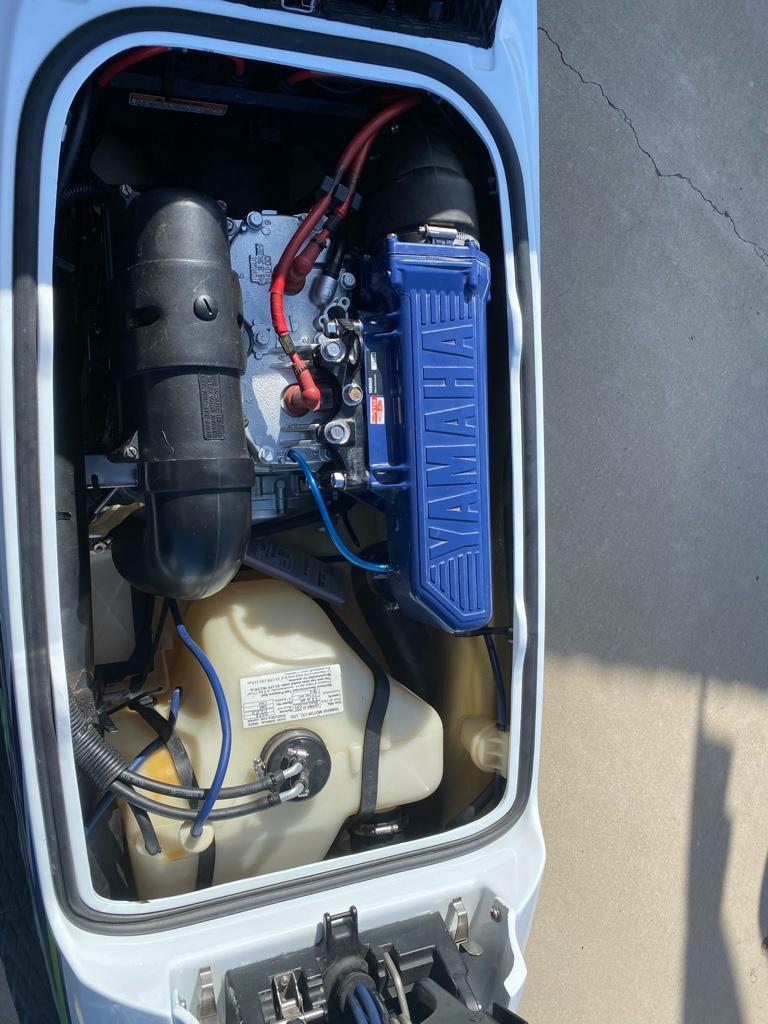 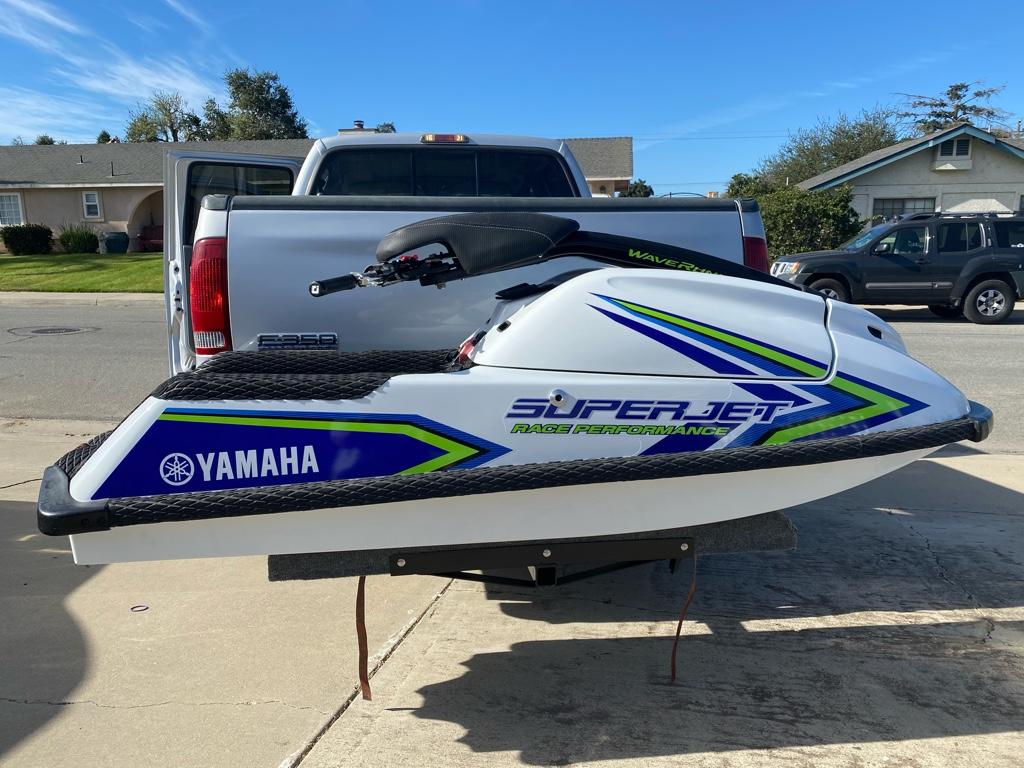 Wow, that looks so clean. Very classy! Out of all the "modern" SJ graphics, I like those the best. Green and Blue look great together... and purple haha
For real though, that thing looks factory fresh!